At the end of last year we set up a walking group with friends and family called the Sheffield Hill Hikers. Me and Rufino had begun to hike more regularly at weekends and although we still really value our rulu adventures time together, we also enjoy sharing those adventures with friends and family. I felt like I was texting everyone repeat messages for separate planned hikes which was quite time consuming and also I thought wouldn’t hikes be a great way to bring different friends together 😊 So I set up the whats app group and now when we’re planning a hike, we can share our plans on the group and depending on whose available and wants to join, we can modify or upscale difficulty and duration.

On Sunday, 6 of us set off on a 5 mile hike starting and ending in Castleton. Me and Rufino have hiked round here lots and I’ve been coming to this area for years but we found a hike in our 50 Walks in The Peak District book suggesting a new route which everyone was happy with.

It’s amazing how you can have been somewhere numerous times and always stick to the same route, the one that you know. This was our first route up Cave Dale path, behind Castleton taking in the beautiful views of Pevril Castle. This part of the walk was way harder than it looks in these pictures. This path was like a wind tunnel, but me and Roanna kept taking advantages of the breaks to admire the rock formations. 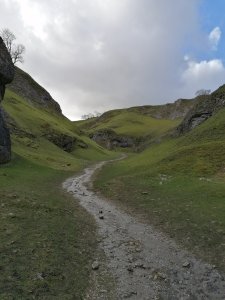 The route continued up in a straight line and then turned right heading past Rowter Farm (which is a great spot for camping in the summer). There was snow at the top and the wind chill was up. On reaching Windy Knoll (appropriately named) the route bears right and passes the base of Mam Tor circling back down to Casleton via the 3 caves: Blue John Cavern, Treak Cliff Cavern and Speedwell Cavern. Although at this point we discussed the option of extending the route to include Mam Tor we decided it was the best to keep to the planned route because “if its this windy here, then how is it going to be up there?!”

Taking shelter behind a wall…

On descending back down to Castleton we all agreed that a stop at the pub was in order and once someone mentioned a chip butty I couldn’t think of anything else. Roanna had made delicious home made flapjack and we’d had other snacks but by the time we got to the bottom a cup of tea and some pub food was just the ticket. And it was Rufino’s first chip butty… Ever!

A totally joyful walk with lovely company. You can always rely on Castleton and around Mam Tor for a good walk and I would definitely do this route again.